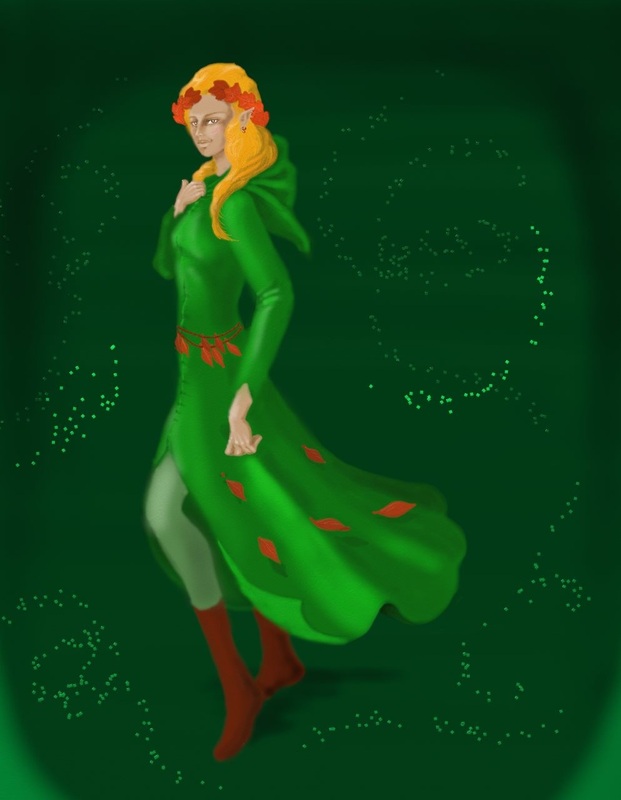 By moss, by fern, by sundew's snare
Sweetest tears for this demise,
By feather, beak; by talon torn,
Welling blood and glazing eyes;
By stony crop, by blackened lair,
As life in death was Jillet born.

Some call her cold, indifferent,
When blood is lost and breath dismissed;
But I have seen her weeping here,
With muffled sobs against her fist,
And in her eyes are feelings pent,
Yes, Jillet knows of pain and fear.

I met her walking by the creek,
She passed a fallen death-sprawled hare,
A falcon tore the steaming meat,
In Jillet's face I saw her care,
Her eyes, compassionate but bleak
Spoke of life in that defeat.

I saw her watch with still compassion,
As a bird fell from the sky,
Feathers faded in old age,
And Jillet smiled to see it die;
Yet she loved it in her fashion,
In the way a god might gauge.

To touch her arm was, yes, unwise,
But she intrigued my mortal thought,
Her hair gleamed fair as willows' floss,
And in her cloak red leaves were caught,
So now she turned in forest guise,
To answer when I queried loss.

"There's death in life, dear man," she said,
Her voice as gentle as the grass,
"Without the hare the hawk would fall,
"As life to death, we all do pass.
"Smiles are won and teardrops shed,
"And blood must answer hunger's call."

"The bird shall die and, in the leaves,
"Its flesh is mingled till the spring;
"The little ferns will greener be
"Than while the bird was still a'wing,
"As death to life, so living grieves,
"But on it cycles, endlessly."

I parted from her in the rain,
And, kneeling on the living earth,
I kissed her hand, and bowing low,
Acknowledged both the tears and mirth,
I hope to see her once again,
When death shall call, and I must go.